Mountain village was founded in 1520 and was originally founded as a settlement of "supers". Only later was renamed Medenec. The emergence of the village was closely associated with mining activities, which the local eponymous hill probably took place from 10 century. The first documented reports of mining dates from the 1449th
Mined here mainly argentiferous copper ore. Since 1520, the town with Medenec privilege of free silver buyout.
Currently the village has about 150 inhabitants Medenec and within the scope of local authority fall within the village - a clearing, Stone, Upper Halze and Kotlina.
Medenec village is situated in the Ore Mountains with spectacular views of the foothills and the hills Doupov. Above rises medence typical silhouette supers Hill (908 m), also called Copper Hill, the Chapel of the Immaculate Conception of the Virgin Mary in 1674 in the shape of the rotunda. Other historical monuments are the Church of the Nativity of the Virgin Mary Statue of the Holy Trinity or the mining tunnels in the top supers. 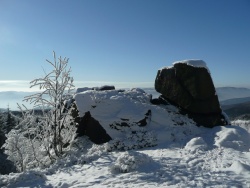